TEL 247: Stand Out with Dorie Clark 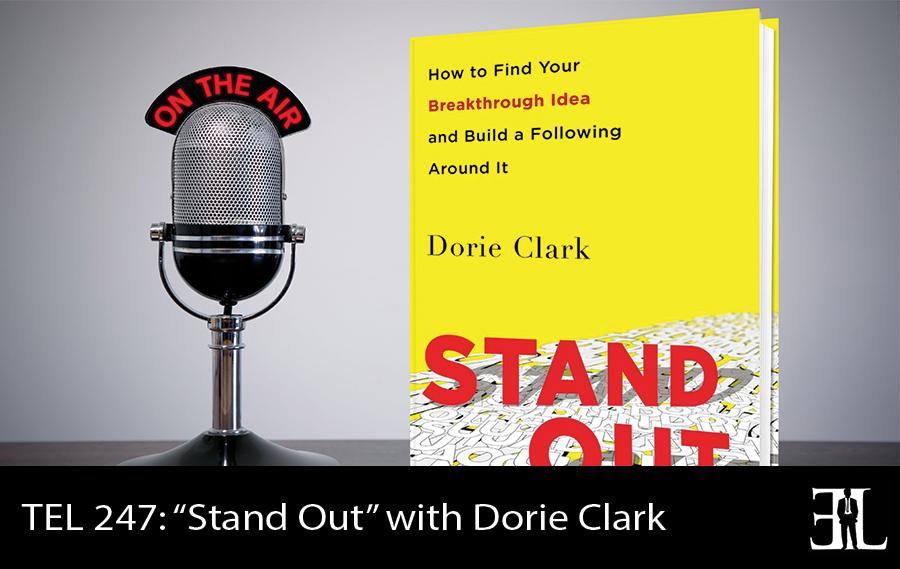 I live in New York City and I spend my time doing a mixture of things these days. I write books, I teach in the school of business at Duke University, and I do a lot of speaking and marketing strategy consulting as well.

What I really tried to do with Stand Out was create a comprehensive road map so that professionals can become a recognized expert in their fields. I don’t actually believe that it’s been done in this fashion. I interviewed top leaders and great business thinkers and tried to create a step-by-step framework that if people follow it can enable them to make a bigger impact with their ideas, get traction, and begin to get better known.

Folks can definitely pick up Stand Out and dive in wherever they would like. I really divided the book into three major sections: finding your breakthrough idea, building a following around your idea, and how to monetize your ideas.

One of the people that I interviewed is a guy named Anthony Chan who is a venture capitalist in Boston. And a couple of years ago he wrote a book called, Hearts, Smarts, Guts, and Luck, and the book is a result of a study that he did. As a VC, Tony was really interested in the question, “what makes entrepreneurs successful?” So he and his partners interviewed thousands of people to try to determine this. What they came up with is that there are four principle personality types that entrepreneurs have: heart driven, smart driven, guts driven, or luck driven. This luck was the part that confused me at first because what does that even mean? It turns out that when Tony looked into it, the luck driven entrepreneurs had something very powerful in common which is that they had a disproportional amount of curiosity and humility. And I think this is so critical because really what happened is because they were curious about other people and they were humble enough to realize they had something to learn from everybody, it made them more likely to engage with folks that others may just pass by. So years later when that random person is important everyone is thinking “oh they are so lucky that they got to meet that person,” but really everyone else had the chance to but didn’t. They are lucky because they are more willing to talk to everyone and learn from them and I think the more we incorporate that in our lives the more successful we will be.

So what I really tried to do in Stand Out was profile and tell the stories of the people that I really found most interesting, folks that I wanted to learn from. I think one of the problems that we have is the way that we often talk about success, people gloss over and the media glosses over that moment of what people did to become successful. Instead people are presented as an overnight success or like they’ve just always been successful from the beginning of time. So the moment that they actually do become successful gets skipped and a lot of people are left thinking, “well, they just must be different than me, they must be a special person. I can’t do that.” And I really wanted to break down that barrier by telling the stories of how people were able to create these ideas and get recognized for them.
One that really stands out for me is I interviewed Robert Cialdini, who is one of the great behavioral psychologists most famous for his book, Influence. So in his interview he was telling me that he devised this framework of the six principles of influence and persuasion. No one had ever organized it that way before and the way that he actually came upon it was that he did undercover work. He went undercover in sales training programs and he learned to sell vacuum cleaners and encyclopedias and he went through all these different training programs so he could learn the proprietary trade secrets that companies were not sharing with anybody else. And at the end of the session he would go to them and say he was sorry that he wasn’t really interested in training to sell their product but he was actually a researcher. He would agree to not use the company name but he asked if he could report on the techniques and results that he learned in the training process and everybody said yes. So through this undercover field research he was able to devise something that no one had ever come up with before.

NOTE: That was just a summary. To get the full deep dive, play the audio clip at 03:54

“You have something to say to the world, you have a contribution to make.” -Dorie Clark

The Credibility/Inspiration Of The Author (01:45)

The inspiration for writing Stand Out was really stemming from my own experience as someone who worked as a marketing strategy consultant in a world where there are tons of consultants out there. I wanted to understand personally how I could become known as one of the best in the field. I wanted to get behind this question of, how do you stand out? So in writing the book I had the opportunity to interview about 50 top thought leaders from a variety of different fields to really look at how the best in the business got to be that way. I wanted to really reverse engineer the process and reveal it so that other people could get out there and make a mark with their ideas.

Other Books Recommended By The Author (14:29)

More Information About This Book and The Author (15:33)

What do you think about Dorie’s book, Stand Out? Share your review in the comments below: