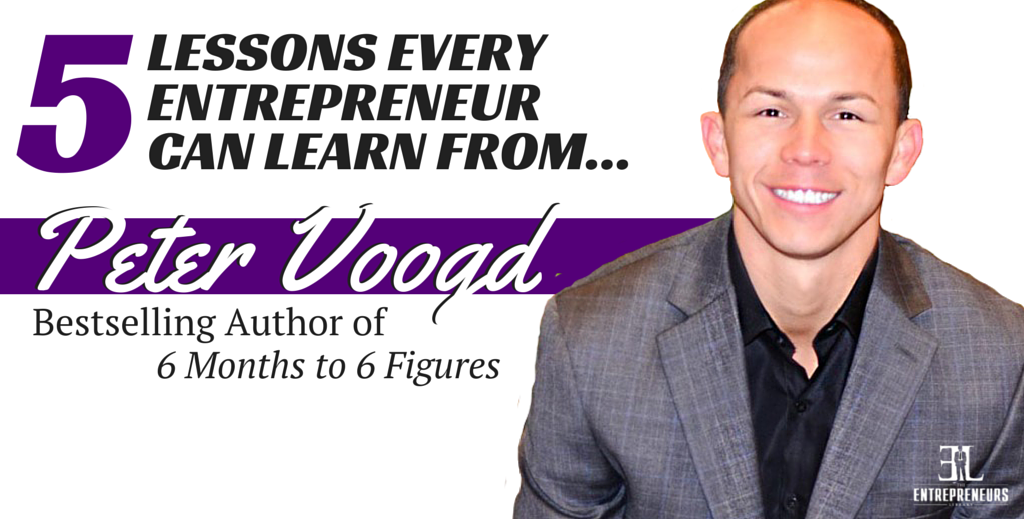 Who is Peter Voogd and what you can learn from him:

Peter Voogd has received a great deal of attention from a variety of outlets, due to his inspiring true story. Voogd was completely and totally broke, but did not allow his circumstances to define him. He set out on the path to riches and was able to go from being dead broke to having six figures within a mere six months. Peter Voogd was not content to sit back and rest on his laurels, so he wrote a book. The book, entitled 6 Months To 6 Figures became a bestseller.

The following are some of the most important lessons that every entrepreneur can learn from Peter Voogd and his book:

1. Never Ever Give Up

While most people would be inclined to give up when they are completely broke, Voogd did not let his situation bring him down. As a result, he was able to triumph under difficult circumstances. If nothing else, Voogd’s story should serve as inspiration to every would be entrepreneur out there. No matter what your current situation is or how many obstacles stand in your path, there is way to make all of your wildest dreams come true.

“Never let someone who gave up on their dreams talk you out of yours.” – Peter Voogd (highlight to share)

So many entrepreneurs fall into the trap of allowing themselves to be defeated before they have even had a chance to begin. Voogd did not. Since his story is no fairy tale and he provides realistic ways for his readers to achieve the same goals as he did, there is no reason why an entrepreneur should not be able to take some level of inspiration from it.

A regular complaint from the majority of entrepreneurs who are starting out is that there simply aren’t enough hours in the day to get everything done. Voogd knows this and his work is dedicated to showing entrepreneurs more efficient ways of doing things. He shows his readers how to get their bigger tasks accomplished in much less time, without taking any shortcuts that could potentially damage the quality of the work being produced.

His strategies are not sugarcoated for mass consumption and he did not rely on any sort of gimmicks to achieve his fortune. Voogd was able to make himself a millionaire several times over by the young age of 27, so his tactics are proven to work. His success is what gives him an immense amount of credibility in the entrepreneurial community.

A lesson that Voogd constantly preaches to his acolytes is the importance of selecting your inner circle wisely and knowing about the dangers of associating with the wrong kinds of people. There are certain people in your life who are just not as vital to your day to day survival as you may believe they are. There are some people in your life who do not matter and never will.

If you hang around with people who do not have goals and plans for their life, then you will end up in the same boat as them. On the other hand, if you spend your time around those who are driven and goal oriented, then you are able to soak up the lessons that their presence teaches you.

The term that Voogd uses to describe this phenomenon is “circle of influence”. In an ideal scenario, a person’s circle of influence would include several people that they can look up to, some true role models. While the term is bandied about too much in modern times, it is crucial for an entrepreneur to spend time around like minded people that they can gain valuable perspective from.

4. Make The Right Choices With Your Time

Voogd preaches the importance of being able to do more with less time and not being afraid to tell people no if what they are asking for will interfere with your ability to accomplish all of the necessary tasks for the day. Organizing your schedule is key and Voogd shows entrepreneurs how to organize their schedule in a manner that leads to maximum productivity.

Whereas some entrepreneurs believe that spending 80 hours a week working is the path to success, Voogd shows them how to work smarter and not harder. He realized that he was using 80 percent of his effort to accomplish 20 percent of his goals and made the needed changes so that he could flip those numbers to his benefit. He began to focus on the most important 20 percent of his daily activities, the ones that created 80 percent of his overall results.

Voogd speaks about confidence and why an entrepreneur needs to destroy their insecurity to move forward. In order to have the utmost confidence, an entrepreneur must have clarity. Clarity only comes to those who have done the proper amount of thinking and know what their goals are and what it will take for them to reach these goals.

An entrepreneur does not get anywhere unless they have a take charge attitude and believe in their own ability to make things happen. No one is going to come along and make things happen for you and this is a lesson that Voogd spends his time teaching to younger entrepreneurs who are struggling with uncertainty.

Talking about success is one thing, but having the guts that it takes to go out and actually pursue it in earnest is quite another. Obstacles are always going to be in your way, but a confident person knows that they have what it takes to overcome them.

Have you read 6 Months to 6 Figures by Peter Voogd? Share your thoughts below: