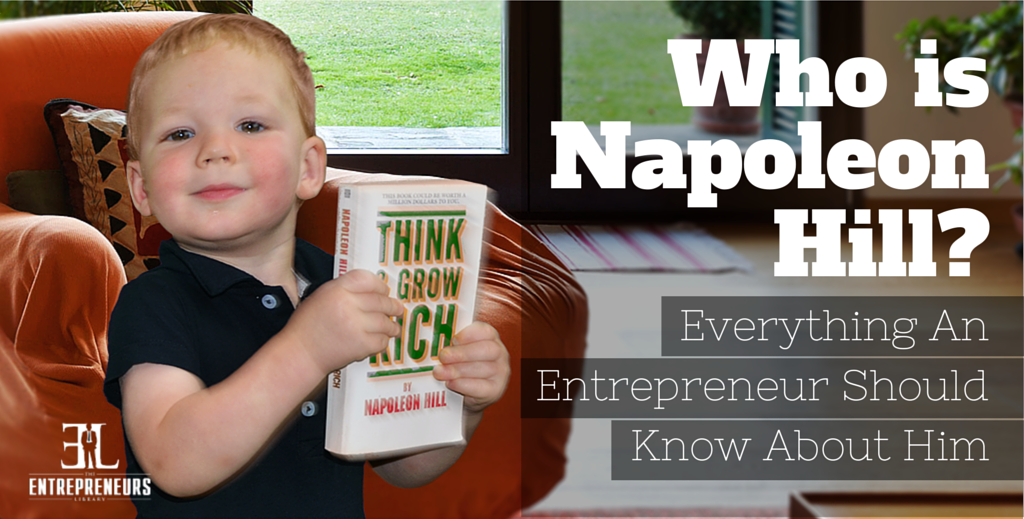 Have you ever wondered why some people are so successful when millions out there are breaking their backs to make ends meet? Of course they are not doing anything out of this world nor have they been blessed by the gods. This is one question that many wantrepreneurs and aspiring business people have been asking for years and thankfully, we have Napoleon Hill’s works among us providing the answer.

Who is Napoleon Hill? Well, he is considered by many as one of the most popular motivational authors of all time. Of course, he did not find the “holy grail” of business success and marketing but he did produce some of the most amazing books on business success that have inspired millions of people around the world.

Born in October 26, 1883, Napoleon Hill is considered as one of the proponents of the new thought movement and probably he is the precursor of the literary genre which is today known as personal success literature. Known and celebrated as one of the most successful writers on success, he has authored the bestselling book of all time – ‘Think and Grow Rich’. Amazing as it might sound, 20 million copies of this book were sold throughout the world before his death. He delved deep into the psychology of successful people and tried to figure out their mental prowess that leads to their immense success in the world of business. Even at some point of his life, he became an advisor to President Franklin D. Roosevelt and this shows how influential he was in his days. Throughout his life, he tried to find the elusive formula that he strongly believed can transcend a normal or regular guy into a person with success.

If you have ever heard these beautiful and powerful words like – “Anything the mind of man can conceive and believe, it can achieve”, you have got an idea of his authority on this particular literary genre. He had interviewed successful people from different walks of life and reached the conclusion that there are certain characteristics that have made these people so successful in their lives. He went on further to say that if common people like you and I can emulate the characteristics of these wealthy persons the chances of successful in life will increase manifolds.

In his book ‘Think and Grow Rich’, he laid out 13 easy to follow rules that he wants us to believe have the secret sauce of success. Okay, we are not saying that whoever read this book is going to be the next billionaire. Well sadly, the world not such a beautiful place. Rather this book contains some practical advice on how to make money, be a greater leader and to be uber successful.

The book has an interesting history. Andrew Carnegie was the person who encouraged Napoleon Hill to start his quest for the secret formula of success. Andrew Carnegie a business tycoon in his days steadfastly believed that success could be defined via a single and simple formula. During an interview of him taken by Napoleon Hill, he got so much impressed that he assigned the job to Napoleon. He asked him to take interview of 500 (+) men and women to find the secret of success. Some of the famous people that Napoleon Hill interviewed are – John Wanamaker, Theodore Roosevelt, Charles M. Schwab, Henry Ford, Alexander Graham Bell and more. The result is his magnus opus – ‘Think and Grow Rich’.

Are you interested in learning even more about the lessons and fool-proof advice from one of the greatest business men and authors of all time?

Check out his amazing book and an interview I had with the director of the Napoleon Hill Foundation, Don Green:
Think and Grow Rich by Napoleon Hill | Listen to my interview with Don Green here

Has Napoleon Hill and his legacy changed your life?

If so please share your experiences and success in the comments below.