A Preview of Three Feet From Gold with Greg S Reid 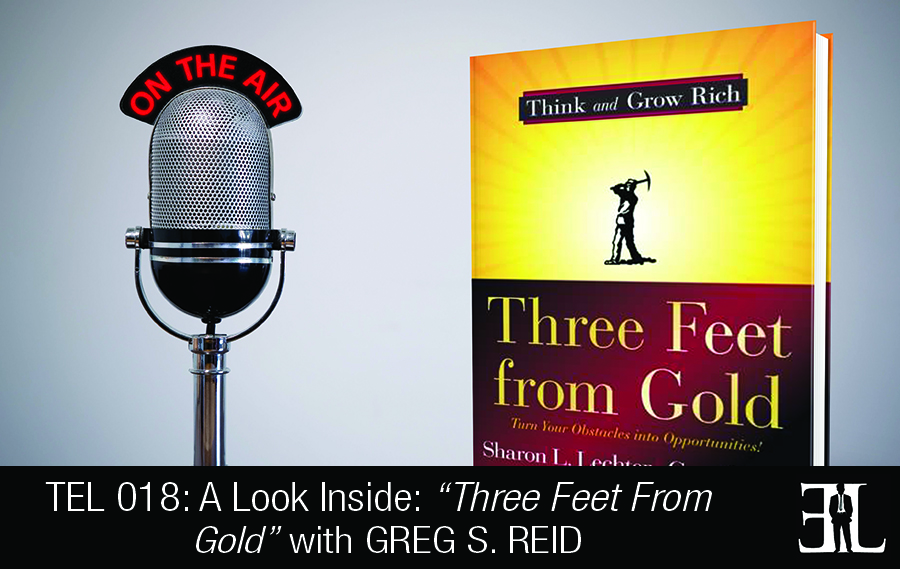 A summary of things you should know about Three Feet From Gold according to Greg S. Reid

In this episode Greg Reid shares with us the inspiring story of how he was given the rare opportunity to carry on the legacy of Think and Grow Rich by Andrew Carnegie. In Reid’s book, Three Feet From Gold, he elaborates on the first chapter from Think and Grow Rich providing you with a deep dive into what modern day thought leaders do when coping with struggle and ultimately coming out on top. Three Feet From Gold is the perfect fit for a thought leader, business owner, or entrepreneur who love focusing on the end game of success, but struggle to realize and overcome the challenges that lead to victory.

The whole concept was so many people always focus on the end but they don’t realize that first there is a dream and then there is a challenge which leads to the victory. Unfortunately the majority of everyone quits in the challenge. This book was a deep dive into what people did to persevere when the going got tough. I wanted to talk to modern day thought leaders to find out how they coped with their situation so that they could come out on top.

You have to have Passion, talent, take action, association and faith; chances are you have found something that works for you. I have realized that when people find what is important to them, that’s where things move. If you are following someone else’s dream chances are you will fall short. If you follow someone else’s passion, chances are it’s not yours so you’ll give up. It’s the people that find their own success equation and do it all out; those are the people that truly live a purposed filled life.

The story comes from R. U. Darby, the gold miner who gave up three feet away from the largest strike in history. It reminded me that most people quit when the going gets tough. So I went on this mission to meet amazing people and the very first person that the Napoleon Hill foundation asked me to reach out to was a guy named Dave Liniger and people don’t know his name but you’ll know his business. I asked Dave if he wanted to quit when he was getting started in real estate back in 1970 and he said every day.

He said it was so bad for two years that every phone call that came in was from a bill collector. The third year it got so bad he was sent to jail and called a fraud and a liar. I asked him what he did and he said he took his attitude from trying to prove everyone else wrong and do something more important just to prove he was right. He called the bill collectors back and told them he didn’t have all the money but he had $50. He sent it to them with a promise that he wasn’t going to quit and asked them to not give up on him. He called every bill collector until the fourth year someone believe in him, bought the first business and that’s called RE/MAX Real Estate Corporation. The moral is how many times have we or someone we know given up right before the miracle happens. I went and met with the president of NASCAR, Mrs. Fields Cookies and the guy building the elevator to space and I asked them all how they avoided from keeping themselves from talking themselves out of the dream. One of the greatest wisdoms came from a guy name John Schwarz who invented String Theory. For ten years everyone said he was crazy and out of his mind but he figured it out. When I asked him why he didn’t quit when everyone else thought he was crazy, he said it’s because he knew he was right. He said the secret of success is to never let another person talk you out of your dream. He said that if you want to be successful, successful people seek counsel and failures listen to opinions. Opinion is based on ignorance, lack of knowledge and unexperienced. Counsel is based on wisdom, knowledge and mentorship. John Schwarz said if we would spend our daily lives only seeking counsel and ignoring people’s opinion, that’s the day your life would change.

The whole idea of writing this book was to help everyday people put themselves in this circumstance and when you’re flipping through the pages you realize you are not alone. Each and every person we talk to, you see yourself in their circumstance saying if they did it, you can too.

I’m an author, speaker and filmmaker in San Diego, California. I have been married for about five years and have a two year old kid which is the pride and joy of my life.

In 1908 Napoleon Hill was given a letter of recommendation from the riches guy in the world, Andrew Carnegie, to go meet his friends to create the first ever formula for success, which is known as Think and Grow Rich. One hundred years later in 2008 the president, CEO and family of Napoleon Hill foundation wrote a very similar letter and they gifted it to me. Napoleons family gave me an opportunity to help carry on and modernize the teachings of the 20th bestselling book in history. The whole concept was could I go out and write a book based on the first chapter of Think and Grow Rich about not giving up when you’re just three feet away from gold.

The Ultimate Gift by Jim Stovall

Related books: Think and Grow Rich by Napoleon Hill | Freedom After The Sharks by Geoff Hudson-Searle | The New Rich by David Moore

Relevant advice and tips: Who is Napoleon Hill and Everything An Entrepreneur Should Know About Him