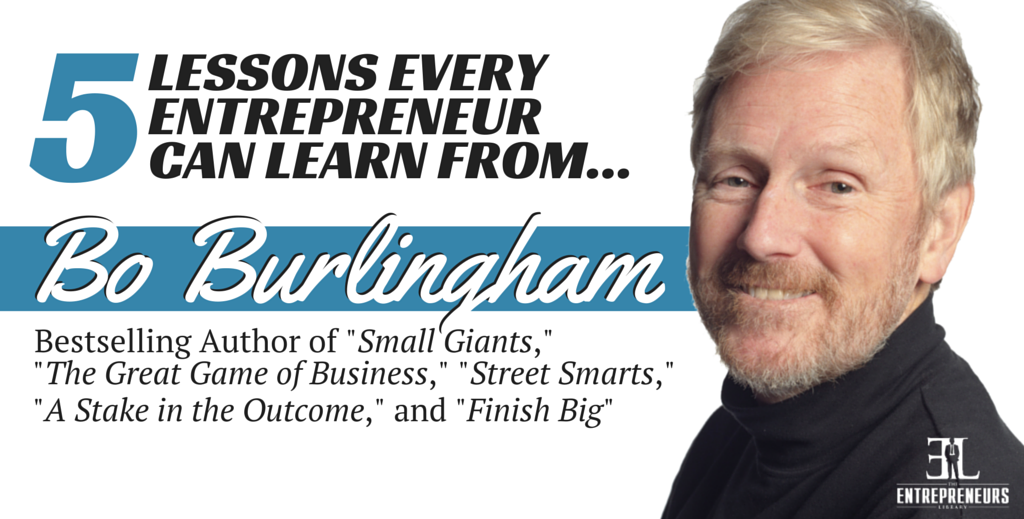 Who is Bo Burlingham and what you can learn from him:

Bo Burlingham is a shining example of what can happen when a person does not take no for an answer and simply finds a new way to do their own thing. After years working for Inc during the early 1980s as an executive editor, he resigned that position down to an editor-at-large in order to pursue his own interests.

From there, he wrote many successful books about life in the modern business world, giving out helpful tips to all of his readers about how employees can own their own companies. There is a great deal that an entrepreneur can learn from Bo Burlingham, so let’s focus on the five most crucial lessons.

It would have been easy for Bo to get comfortable and settle down at Inc. After rising to the position of Senior Editor, Burlingham could have allowed himself to become satisfied. Most people would have been fine with remaining in that position and thinking of ways to advance the company that gave them the job.

It takes a lot of hard work and dedication to make it to any sort of senior editing position at a major publication. Most would not have wanted to see all of that effort potentially go to waste while they take the time to chase after a dream.

However, Bo Burlingham is not most people. Instead of settling in, getting comfortable and allowing himself to fall into complacency, Burlingham decided to strike out on his own path, leaving Inc to publish his own books. Had he not had the courage to do this, he never would have had the time to write The Great Game Of Business, a book that has sold hundreds of thousands of copies.

2. The Importance Of Specialization

Burlingham wrote a book entitled Small Giants. In this book, he does a deep dive into what makes small businesses successful. One of the main reasons he discovered? Smaller companies are more able to train their focus on being the absolute best at what they do. Whereas larger companies may find that it is more important to be everything to everyone, a smaller company spends their resources on performing one particular task.

By specializing, smaller companies are able to stand shoulder to shoulder with their larger counterparts and experience many of the same benefits. People are not looking to make purchases from the largest company possible. The consumer is all about finding the best quality at the most affordable price. The company that provides a top notch service and does not allow themselves to be hemmed in by traditional success definition is the one that will prosper over the long haul.

Small Giants delved into a variety of smaller companies, with the objective of showing readers how all of these companies were able to become so successful, so quickly. Whether it is a record company, a deli or a microbrewery, there are a variety of principles that define prosperous small businesses.

Even a tiny company can go about the same tasks as a corporate giant and experience continued success. While these tasks take place on a smaller scale, a company still must raise the necessary capital, invest the funds wisely and choose the right times to expand their operations or make pivotal acquisitions.

One of the most pivotal that an entrepreneur can take from the works of Bo Burlingham is that it does not matter how big or small a company is. The route to success is the same as it would be for a large company. Small business owners are encouraged to take the lessons that have worked for big companies and apply them to their own situation.

4. Employees Can Control Their Own Destiny

A common mistake made by entrepreneurs is that they do not trust their employees to get the job done. In Burlingham’s book, The Great Game of Business, he outlines the benefits of an open book management style. He did not come up with these strategies in a Fortune 500 boardroom or at a high end business meeting.

Instead, Burlingham investigated the plight of a company known as International Harvester. When all of the employees of this heartland factory stood to lose their jobs forever, they banded together and came up with a solution: the open book management style.

When employees feel like they are truly an integral part of the equation, their performance becomes much better. Burlingham has preached the importance of allowing your employees to know about how the company is functioning as a whole. This keeps them from being taken by surprise when certain events occur.

5. There Is No Magic Formula

When Burlingham came together with Norm Brodsky to write Street Smarts, he did so with one goal in mind: showing people that there is no magic list of bullet points that an entrepreneur can hit that will guarantee their long term success. He preaches the importance of your overall mentality when trying to start a new business and displays the importance of street smarts.

Being book smart is not enough. An entrepreneur needs to know how to read people and judge a situation that may not come with a helpful handbook. Burlingham also teaches his readers that there will be mistakes made along the way and that these mistakes do not have to come to define you. It is how you rebound from these errors that determines your level of success.