A Preview of The Maker Movement Manifesto with Mark Hatch 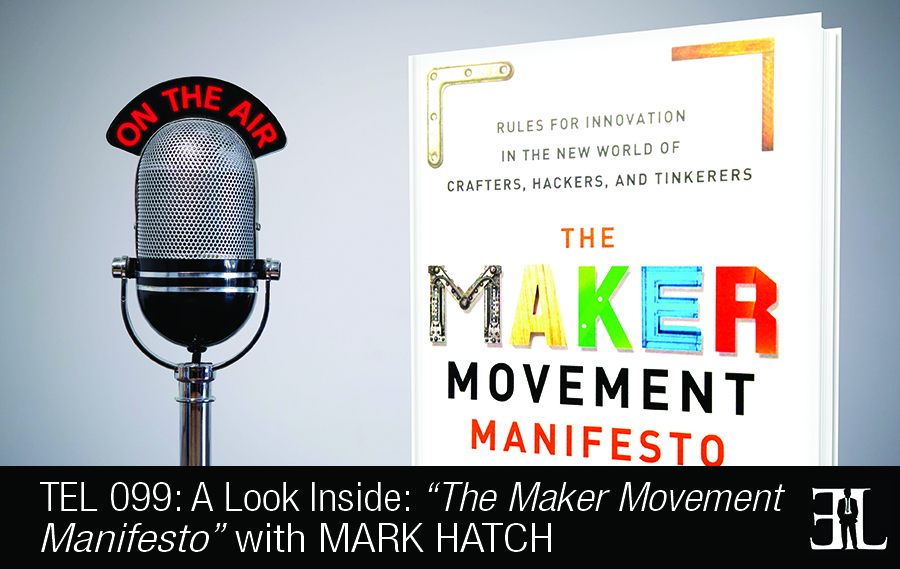 In this episode Mark Hatch shares his book, The Maker Movement Manifesto, where he describes remarkable technologies accessible today and shares stories of how ordinary people have created extraordinary products from those tools.

In his book, Hatch explains and shows you how to create, innovate, and make a profit with nothing more than your own creativity, hard work, and a desire to make some change. The goal of this book is to help entrepreneurs take part in a new age of manufacturing tools which were once impossible to afford.

This book is perfect for entrepreneurs who are very creative and innovative, but need an all-in-one resource for manufacturing new product ideas on a minimal budget.

Everything I thought I knew about innovation in launching a hardware company has fundamentally changed in the last decade. I had not seen anybody writing about the impact that it was going to have on the startup world. There is this confluence of trends that have come together in the last decade that nobody had really wrapped together in a single volume. So I felt that somebody needed to write it and given my position in the industry it made sense for me to do it.

Each of the chapter pretty much stands on its own. It is a fairly easy read in that I do a lot of stories to back up the reality that is occurring. There is nothing like giving examples that have already happened to convince the reader.

You no longer have to be a professional to change the world.

I start with my first day at a TechShop. It was very early on, we had only been open for a year when I ran into Jim Newton the founder of TechShop. Jim convinced me to come by and take a look at the place and given my background I was intrigued with this new retail platform that he had developed. I had talked to three entrepreneurs back to back and each of them had said they had saved 98% of their development cost and each are now worth millions. At the end of that day I realized I was standing in the future and because of the potential economic impact this would have in unleashing the creativity of the creative class there needed to be one of these in every single city on the planet. As I moved through my experience over the first three years I realized that this was having an impact everywhere. Then I also realized there was a gap on the current availability of books and discussion about the movement itself. I set about to capture the gestalt of the movement itself. So I came up with nine principals that basically makeup the manifesto itself.

The first principle is to make. Humans were designed to make, we have that opposable thumb and it’s ingrained in who we are. Just making things is a fundamental activity that humans get enjoyment out of. One of the things that makes making whole is the ability to share it and that’s the second principle. Often there is a giving component which gives meaning to these projects that are completely different than what you get when you buy something off the shelf. There is a play principle as well. A lot of the best projects turn in to the best projects because somebody comes at the project from a different angle. And then there are some really important things around participation that I am seeing emerge in a collaborative community. It is a lot more fun and affective to work in a space that has a lot of other people working away on their projects rather than doing it in your garage. The last two principles are support and change. Support is the call to action and why I call it a manifesto is that this platform is creating an environment where we can do innovation and change the world at price points that we’ve never seen before. And the last principle is to change. When you embrace this activity making it will change you in positive ways and its import to embrace that and encourage other people to change as well.

The reason we call this a manifesto and movement is because we are anticipating and expecting a significant portion of the population to change their consumer behavior, behavior around gift giving and attitudes around trade skills.

The Credibility/Inspiration Of The Author (0:39)

I am a former Green Beret, quite a while ago, but it feeds a little bit into the book. I was trained on how to participate and/or run a revolution. From there I did a startup and went back to school. I worked for about eight years at Avery Dennison manufacturing company and a year at Kinkos. All of this was before I began at TechShop as the CEO and Co-Founder.

I saw early on after I joined that there were small companies that were launching hardware startups for the lowest cost I had seen in my career. The average member there saved 98% of their developmental cost which fundamentally changes the access to be able to create hardware startups. A friend of mine, Chris Anderson, wrote an article called The New Industrial Revolution which inspired me. Chris took one angle at it and I wanted to write a book that would be open more to makers as well as a fairly easy read for policy analyst and startup junkies.

Other Books Recommended By The Author (19:55)

Innovation and Entrepreneurship by Peter Drucker

Visit MarkRHatch.com to learn more about Mark and his book.