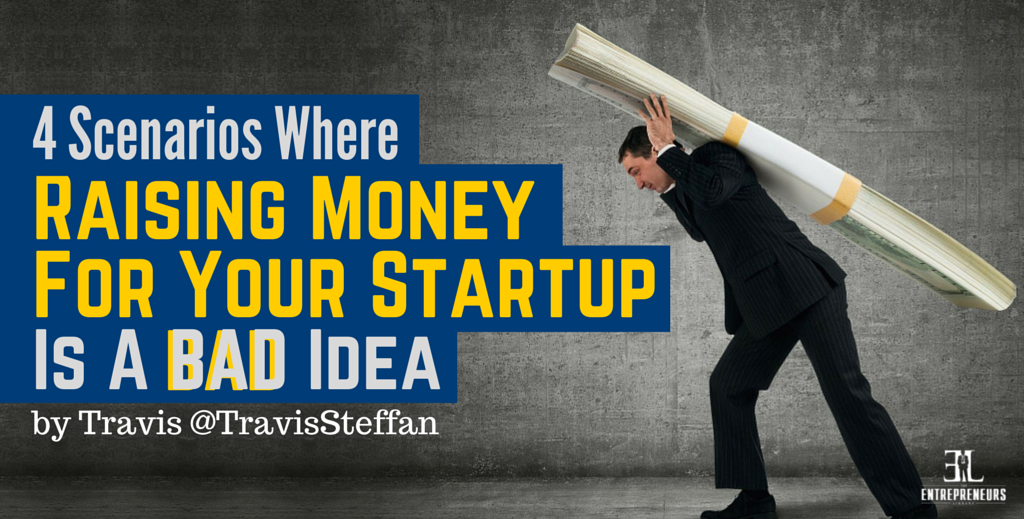 Raising money for your startup can seem exciting. It seems as though it’s the first step in what will eventually become your Zuckerberg-sized concept you’re going to blow up to the moon.

These investors want to give me money? …Well of course they do because my company is totally destined for greatness.

Okay, you may not get this absurd with your internal monologue, but in all likelihood it’s the feeling you’ll get when you get a “yes” in a room with an investor.

That said it’s not all sunshine and rainbows. In fact, if you can get creative and scrappy and bootstrap your company for as long as you possibly can prior to raising a round of funding (IF you have to raise one at all), you’re going to get a WAY better deal when the time comes, AND you’re going to be a lot more likely to use that money wisely.

As a business mentor for MentorMojo, I spoke on this topic in more detail here:

Don’t get me wrong – I’m not anti-VC money. In fact, I’m a huge advocate of it under the right circumstances.

Here are 4 instances where raising funds may be a very bad idea for you:

If you’re a new founder, chances are you’re a combination of smart, hungry and clueless. We all were – and it can be a profound asset for us in the early days. As in anything, no matter how predisposed you may be to success, there are going to be some hard lessons you need to learn before you’re good enough for the next level.

I’ve had the privilege of living among a few different first-time founders who just raised a round of venture capital, and rather than allowing themselves to fail on a small scale by trying to leverage some creative financing and/or bootstrap things before upping the ante, they instead burn $1 million or more because they’re simply too green to know when they’re making good, informed decisions, or when they’re simply throwing money at a problem they’re not yet intellectually capable of solving on their own.

2. Your idea came from your own brain

Most founders start their first business – or even their first couple – because they had what they believed was a good idea. Every time they think about it, they get so fired up to the point where they take the leap, and soon begin investing time and hard-earned money to make it real.

What they soon start to realize is that an idea is only good for one thing: to spark the very first action. However, as you move forward, you’ll find that your success will not come from any one person’s idea – even if it’s your own. After all, you are only one single plot on your overall customer graph. If you want to grow and move forward, you have to look at and adapt to the overall patterns in the feedback you gather from your target customers, and allow your product or service to evolve as a result.

If you can begin doing this even before you build anything at all, you’ll find that you’ll be able to craft a solutions that your customers may even finance themselves through pre-sales and early-access discounts – negating (or at least prolonging the time before) the need for outside funding.

3. You believe your idea is the path to untold riches

Start a successful company, no matter what it is, could be one of the more difficult, confusing and anxiety-ridden journeys you ever embark on. Every single founder is going to have terrible days where it feels like the walls are closing in around them. These moments are the ones that separate a successful founder from one who cracks under the pressure.

Regardless of how mentally tough you THINK you are, you’ll be a lot LESS tough if you’re only in it for the payday. We all love money, but as strong of a motivator as it can sometimes be, it’s almost never strong enough to kick a struggling founder into gear. Your customers will also sense when you’re only in it for the money as it’ll be a lot less about their ROI and a lot more about yours. Soon after, they’ll run for the hills.

That said, if you’re instead intensely passionate about solving the problem your product or service has set out to solve for your customers and you absolutely love living and breathing what you’re working so hard to create, you’ll be a lot more likely to weather the storm and move forward. Your customers will also gravitate to you – so by focusing on helping them, they’ll help you in return.

4. Your team is made up of friends and friends of friends

Your team’s implementation of your concept or company strategy, not your concept or strategy itself, will be what determines the success or failure of your brand. However, new founders often justify hiring their friends – or friends of friends – because they both don’t know how to find and recruit talent, and they simply want to work all day with their friends.

Most of these new founders then soon realize how tricky having a prior friendship can make an employer/employee relationship. While they can succeed in some rare cases, they’re nearly always much more complex in nature.

Instead, forego hiring friends and personal connections and instead focus on educating yourself on how to recruit great talent. Embrace the “hire slow, fire quick” mantra, and never raise a round of funding until you have a great founding team comprised of passionate, proven individuals.

Every single investor will ask you about your team as they know how important it is for you – and you need to ensure this is one of the first things you address before walking into a room expecting VC money.

So when SHOULD you raise venture capital?

In my humble opinion (after starting, bootstrapping, scaling and selling 6 tech companies in the last 6 years), there is only one and only scenario where raising venture capital is appropriate:

When you’ve built a small, strong team with proven track records who have put together a minimum viable product you’ve crafted through extensive feedback sessions with your target customers (many of whom are currently using and paying for your product) and you’ve got a well-researched plan on where you’ll target more customers, how much it will realistically cost, what you’ll need build next, and what a realistic exit strategy will be for both you AND your investors.

Oh…and you have discovered, after doing all these, that you actually NEED outside funding to scale your business (in many cases, you no longer will).

If you don’t have ALL of these, keep bootstrapping!

Travis Steffen is a serial entrepreneur and the founder of UP. As a viral growth expert, Travis has built and sold 6 tech companies in the last 5 years. He specializes in viral growth mechanics, analytics and techniques, agile software development methodologies, growth hacking, outsourcing and bootstrapping. Travis is also a former Division 1 football player, former Pro MMA fighter, and Professional Online Poker Player.