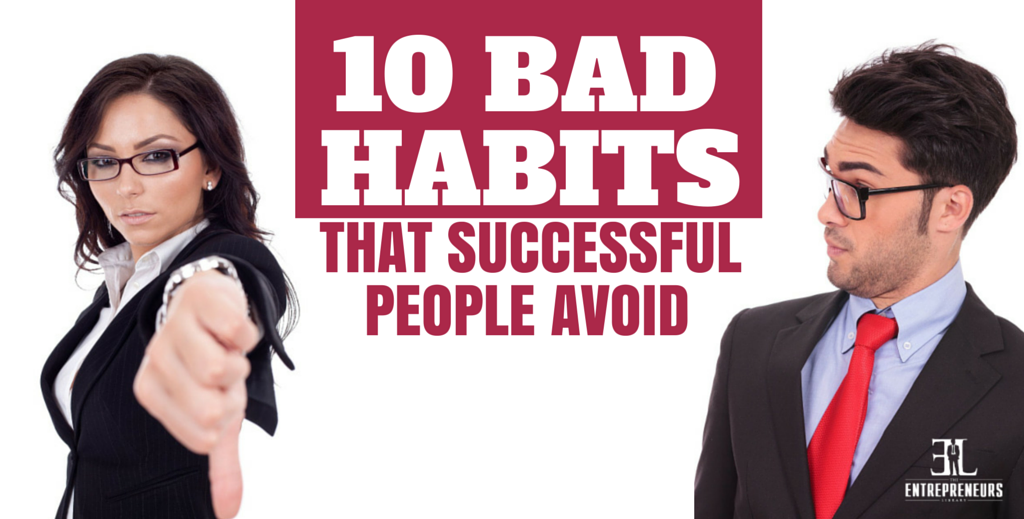 We all know those successful people in our lives. Our bosses, our friends, or even clients who come in, they are all successful and you may wonder how they do it. You know they must be hard working, determined and goal oriented to have made it to where they are today. These are all traits that we can admire and look up, and hopefully take a lesson from. There are a lot of bad habits that get us off on the wrong track and away from success, but successful people know what bad habits to avoid and deter from so they stay on the path to success!

In order to be very successful here is a look at some bad habits that successful people avoid:

One of the worst habits that people have is waiting for success to land in your lap or looking for quick and easy schemes that never really work. Successful people know that you have to work hard for what you get, and you have to work even harder when you have a goal in mind. Waiting for opportunity to arise causes you to often lose sight of the end goal, and can often leave you questioning your choices when other opportunities have passed you by while you waited for one to land in your lap. Don’t sit around and wait, get up and go get it!

2. Letting other people get in the way

Not setting priorities or setting yours below someone else’s is one of the worst habits that successful people will avoid. They don’t let someone else’s set priorities interfere with their own. Successful people know what matters to them (promotions, projects, financial plans, goals) and they know that by letting other people’s priorities (be it values, promotions, etc.) get in their way, they are setting themselves up to fail. Of course, they know that giving a help hand isn’t a bad thing, but they don’t let anyone else’s pace slow them down!

One of the biggest downfalls of success that prosperous people avoid is resistance to change. The way the world grows and the technology in it and the process by which people get things done, it is always changing. Those who resist that change are often doomed to failure or to falling behind. Successful people know that change is a good thing and the growth potential that comes with it is huge! By allowing change to happen, grasping it and moving forward with it, you are advancing yourself and your goals.

4. Afraid to speak up

Successful people are those who are not powerless. They are strong-willed, willing to stand for what is right, and aren’t afraid to speak up with their opinions. By letting others dictate the way things go, you are not being successful. However, by giving good input, dictating the way you want things to go, and giving and articulate strong point of view, you are showing others a new way of seeing or doing something, and that is huge potential for your success.

Those who are successful are not pessimists who see the worst in the world. They take the world (and the people, places, and situations in it), see it for what it is, and set out on a path to make it better. They find the good in situations and if there is none, they create it. They push forward in tough times, showing that there is strength in leadership. A good outlook and a strong sense of willpower and well-being will set you on the right path to success and often will make others follow.

Being jealous of others successes will only hold you back in the long run. Being jealous often leads to endless self-doubt, questioning many decisions, and often making you stray from the successful path. Successful people are happy that others are succeeding and will praise them. They will listen to others successes in hopes that they can learn something new that will further their own achievements and get them closer to their goals. Being glad for someone else’s achievements eases the mind and heart, giving you an overall feeling of well-being, which will boost your internal go getter side!

Those who are on the path to success do not talk down about others or gossip. Not only does gossiping lead to lies, mistruths, and twisted versions of things that have happened, but it makes you look less successful. To stand on the rumors of someone else makes you appear to be climbing the backs of those around you just so you get to the top. Successful people don’t gossip, they praise the works of others and give good impressions of others characters.

8. No planning or goal setting

Those who are successful have goals in mind. They know what they want and have made a plan to get there (and maybe have even made a few back up plans in case something doesn’t work out with their initial plan). They realize that there are no wrong turns, just more opportunities to learn something new, to see things in a different light, and to push yourself to get to that goal when things do get tough. Those who want it, will get it!

One of the best qualities about a successful person is their humility. They don’t tout their successes from the rooftops or make others feel beneath them because they haven’t reached the same success. Those with humility will appreciate the gratitude, but will also share in the success. Those who have succeeded will rejoice with others and thank them for their help in assisting the successful person of making their goals happen. It always takes more than one person to reach your goals, no matter how independent you are.

When success has been reached, successful people don’t just stop trying. They don’t say, I have made it and have nothing more to do! No, they take the day for what it is, and then wake up anew with a fresh goal in mind. They don’t stop, they don’t pass by new opportunities. They know the keys to success and how to reach those steps and goals. With a path and goal in mind, and a determination in your heart and mind, you can be as successful as you want to be!

For some more resources on how to act like very successful people, here are some great books that I recommend you read:

What bad habits did you have to sacrifice in order to stay successful? Share your story in the comments below:

Category: Personal Development      Tags: afraid to speak up, bad habits that successful people avoid, being jealous, calling it quits, charisma on command, creating gossip, no planning, one of the worst habits, path to success, reluctant to change, the greatness zone, the happiness of pursuit, the miracle morning, think and grow rich, thinking negatively