The Untold Story About Wade Danielson and The EL 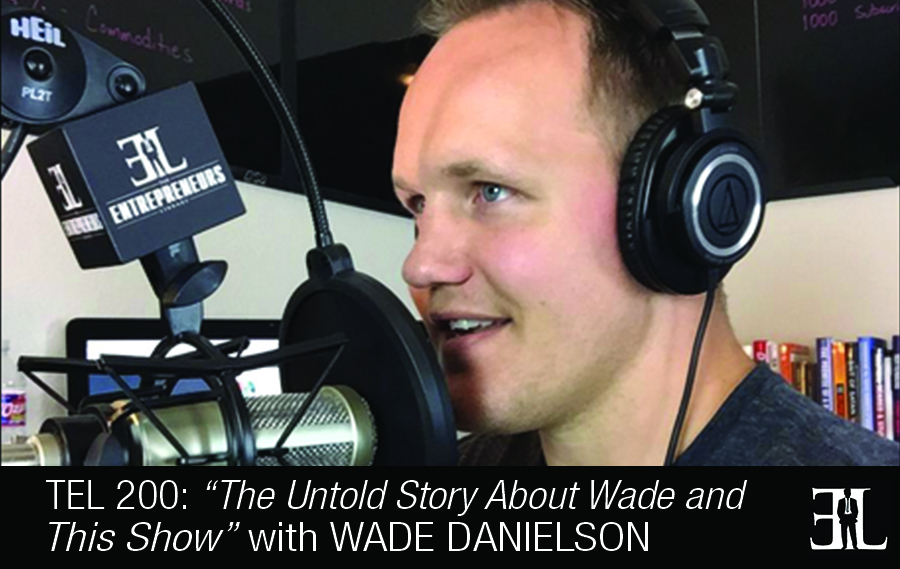 A summary of things to know about Wade Danielson and The Entrepreneurs Library:

In this special episode of The Entrepreneurs Library serial entrepreneur and CEO of VoterSnap, Patrick Stevens, guest interviews Wade Danielson on his entrepreneurial journey and this show.

Since the launch of The Entrepreneurs Library, Wade has been asked so many questions that relates to his entrepreneurial life and the driving force behind his idea for this unique resource. The goal of this episode is to give you a more personal look into the life of Wade, the failures and successes along his journey, what led him to creating a book centric resource for entrepreneurs, and how his first company got listed #786 on Inc’s Fortune 5000.

AFTER YOU LISTEN/READ: Whether you are a subscriber to the show or a brand new listener it would be very humbling if you left your feedback about this show by commenting on this post.

A Summary of The Interview

Will you give those that don’t know you a bird’s eye view of yourself? (6:30)

WADE: I was born and raised in Nebraska, moved around the Midwest a ton due to my father working for the railroad. I ended up back in Nebraska for college and then met my future wife and decided to move back down to Texas where I currently reside. As of recently we now have two boys, two years and eleven months old.

A little background on where it all started was as a college kid I got in front of an awesome group of people, an education system that taught me the importance of reading which completely changed my life. I had big goals and dreams and it was the education I was looking for. That led me to starting my own company, Guardian Network Solutions, at the age of 25 which I still run today and about to have our five year anniversary. We found a niche for something that was missing in the network security industry and decided to fill it. Every day we focus on helping small business owners keep their network secure. Over the years we grew organically and started to add people little by little to join our team and help us reach our goals as a small business. Our fourth year in business we hit a little over four million in revenue and have huge plans for the next couple of years and in 2016 we are looking to be a 10 million dollar company.

If Mark Cuban or Donald Trump were to introduce you, what would they say? (11:50)

WADE: I would hope that they would talk about me being someone who is more of a time crusader, someone who is always looking to maximize the most out of life. I’m a big believer in focusing on putting more years onto your life and then putting more life into those years that you have. I am someone who knows that he’s never going to be perfect but is always in the pursuit of perfection.

What was one of the first main defining moments in your life and reasons that made you make a decision to become an entrepreneur? (13:45)

WADE: One of the big things for me was getting married. I realized I was ok as a single guy being fairly broke and living at a friend’s house on a half inflated air mattress. But when I really got serious about proposing to my wife, the thought of bringing someone else on, I knew I was never going to bring someone else to live like that. So getting married was a huge part of it and it was the first time that made me think at a level that I’d never thought before. Another thing that motivated me was one Christmas I had asked my boss for an unexpected day off in order to drive up to Nebraska to spend time with my family before a big storm hit. I knew that if I didn’t leave the day before expected I would never make it there. So I called my bosses and could easily tell that they both weren’t supportive of it at all. It was then that I realized I was not in control and I knew that entrepreneurs have more control of not only time but more money. Those were two extremely big moment in deciding to become an entrepreneur.

What was your mindset in taking the leap from working for a company fulltime to actually starting a company where you have all the responsibilities to think about? (18:30)

WADE: I am glad this question was asked because mindset is such a massive part of winning and losing in the entrepreneurial game. Your kids are an excuse not to start a business or your kids are the reason to start a business and that’s the way I thought about it. Even though I didn’t have kids at the time but I worked really, really hard for that future child. The thought process was it was a bigger risk for me to actually keep working a job than it was for me to be an entrepreneur who bought back his freedom because that time as an entrepreneur allows me to focus on my marriage rather than working 11 hours a day.

You’re coming up on your five year anniversary at GNS and knowing that around 90% of businesses don’t even make it to the five year mark, let alone be as successful as it is. So what from your perspective are the reasons why Guardian Network Solutions has been so successful and made it this far? (24:50)

WADE: My personal belief is that most people fail in business because they are so specialized in what they do but they don’t know the business side.

Being a podcaster and in this specific niche within personal development, what’s the primary content that you’re seeing most successful entrepreneurs are consuming right now? And how do you see that changing over the next five years? (27:42)

WADE: From what I’ve seen I think the predominant sources are still books, blogs, magazines, and audio books. I think you will eventually see a large shift to audio-on-demand.

When did you realize self-education was the way to real and lasting success for you? (31:30)

WADE: I think the first time I realized it was in college, 21 years old, and going to classes that weren’t very specific. I was learning business law and more interested in business and marketing. I was the person in college who said that I will never read again and believed that reading was so unbelievably boring. This was until I finally read a book that I was actually interested in which was Think and Grow Rich by Napoleon Hill. It was from that point forward that I became addicted to personal growth and that came through reading.

WADE: After reading The 4-Hour Workweek by Tim Ferriss, I began to do some research on him and ran across the podcast called Entrepreneur On Fire. It’s a seven day a week podcast that focuses on business owners and entrepreneurs. I fell in love with it real quick and started branching out and looking for other podcasts from there.

What sparked the idea of The Entrepreneurs Library? (38:06)

WADE: I was looking for a way to diversify from some of the other companies we own. I was always looking for my next great book but finding those is not always easy. I was using Amazon, Google, and trying to find a good, quick, clear, and credible way. I realized there was no podcast that helped people find their next great read and it was then that I knew I had to do something about it.

What separates other book review sites from The EL podcast? (43:00)

WADE: I think some of the biggest things are credibility, deeper dive, short and straight to the point.

What’s next for The Entrepreneurs Library? (48:30)

WADE: There are a couple things but the biggest is video. We are always looking at how to best serve the market and everyone likes different things. I have never been a massive blog reader but some of our audience is. What we are trying to do is really be able to capitalize on the different markets of helping entrepreneurs find great content. One of those things is we are launching a video podcast and more than anything it’s there to cover rapid reviews.

If you could write the perfect book for entrepreneurs, what would you title it? (51:00)

What is the one thing that you’ve implemented personally in your life that was an absolute game changer that you believe would add a lot of value to others? (51:36)

WADE: I call it Time Lining. I do this with my goals and use up a very long marker white board and draw out the next two years of my life. On that board I layout my goals, trips, action items, business idea, etc. From there my timeline gets even more specific as I break it down into months, weeks, and days.

WADE: After interviewing Hal Elrod on his book The Miracle Morning, I started waking up earlier, drinking plenty of water, and stretching. Then I wanted to take it a step further so now I wake up at 5am and the first hour is for me and the second hour is for my wife.

WADE: Something I need to change and will change is that I need to eat slower.

If you could go back and redo anything in your entrepreneurial life, what would you change? (1:02:20)

WADE: I think the best advice from a book or point blank would be appreciation. Those that appreciate seem to live an unbelievably more fruitful life than those that don’t. And to go along with it, it would be time. Time is worth more than money.

If you were Wade Danielson, how would you make The EL better? Share your thoughts in the comments: