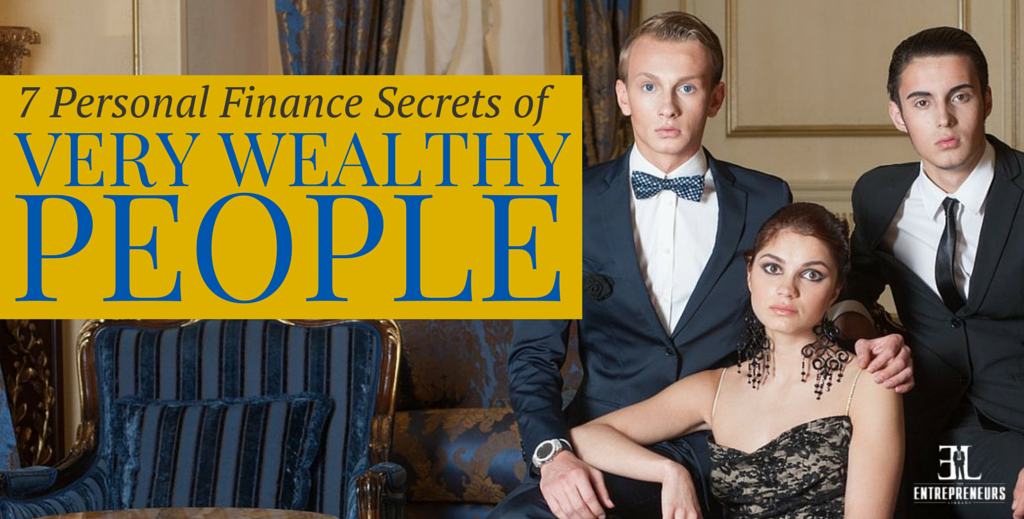 In a world where the rich are only getting richer and the income gap between the upper class and lower class is only getting wider by the day, many citizens wish to know the secrets of the wealthy.

As I have learned from the many wealthy authors we have interviewed, a much larger percentage of the rich are self-made than many are willing to believe. Generally, wealth is not just handed down from generation to generation, and every person who is rich did not get there because someone simply gave it to them. By following these 7 personal finance secrets of very wealthy people, you too can join the financial elite.

The typical way of thinking is for a person to trade in their valuable time for an income. By following the majority of society and using this method to make a living, you are trapping yourself at the bottom of the financial totem pole. Wealthy people do not allow themselves to fall into this lifestyle and do everything they can to break out of the cycle of trading 40 hours or more for a relative pittance.

A wealthy person earns their money by tapping into their creative mind or by discovering a consumer need that has yet to be adequately filled. To become wealthy, stop burning the midnight oil and breaking your back by working as many hours as possible. Work smarter, not harder.

People with wealth do not let themselves be boxed into one way of thinking. There are decisions in life that must be made rationally, others that need to be made logically and some that require a blend of both mindsets. Each form of thought has its rightful place and the wealthy know when it is time to tap into their logical thought and leave their emotions out of the equation.

Lower and middle class citizens tend to make decisions that are based entirely on emotion. By blending the two ways of thinking, a person can maximize their ability to make the correct decisions and improve their financial position.

3. Money Is Not a Finite Resource

Since ideas are how people acquire true wealth and great ideas are all around us every day, that means that money is infinite. Those who are not wealthy do not see money as something that is easy to acquire and hold onto. This mindset starts to become a self-fulfilling prophecy, which will keep you from reaching your true financial potential.

The reality is that there is more than enough money out there for everyone to live their dreams. It is as simple as realizing that money is generated by ideas, not hard work. While you can work hard for your money, those who are truly rich abandoned this idea a long time ago and you should too.

The wealthy view money as the freedom to do whatever they want to do, a passport to pursue their heart’s desires. Lower and middle class citizens begin to equate money with status and will purchase items to make themselves appear to be more rich than they really are. The wealthy do not waste their time with attempting to project an aura of riches.

If you are trying to build up your fortune so that you no longer have a boss and can live your life the way that you want to, this is the right mindset to have. If you are seeking riches so that you can purchase items that will show off your abundance, this is the mentality of the poor.

By training yourself to expect large amounts of money, it will become much easier for you to make the sort of aggressive moves that it takes to become. Expecting to become rich means less trepidation when the time comes to take a major risk.

6. No Need To Choose A Lifestyle

Those who have never acquired any wealth will bemoan the lack of family time that the wealthy have and try to tell you that it is impossible to live a balanced life. This notion is patently false and the wealthy are never forced to pick one way of life over the other.

Since they longer trade their money for time, it is much less challenging for them to balance their schedules. The wealthy generate their income by focusing on ideas, not by ignoring their families and friends.

The wealthy believe in continuing their education and they do not believe in the classroom environment. While the rich are often well educated, they do not confine themselves to traditional methods of learning. They are a hands on sort who train themselves on the job.

As the lower and middle classes allow themselves to fall under the spell of trashy entertainment, the wealthy seek knowledge and enlightenment wherever they can find it. They are intellectually curious and always seek new forms of mental stimulation.

What are your personal finance secrets? Share if you dare in the comments below: